The 2030 Agenda Commissioner, Barcelona de Serveis Municipals (B:SM) and Mobile World Capital Barcelona are launching this call to the sector, through the InnovAcció 2030 programme

The aim is to promote the design of a flexible charging point, capable of covering several parking places, and the production of a charging point that cuts the cost price of current models by 85%

The 2030 Agenda Commissioner, Barcelona de Serveis Municipals (B:SM) and Mobile World Capital Barcelona are launching two challenges to continue promoting electromobility in the city. Enshrined in the InnovAcció 2030 programme, the two projects are intended to stimulate the transition to electric vehicles, one of the challenges of future mobility in line with the 2030 Agenda, and the achievement of the Sustainable Development Goals.

The Endolla Barcelona electromobility network, which will include 703 active points by the end of 2022, has 70% of its charging points in B:SM car parks. Given its density and compactness, Barcelona is aiming to prioritise sustainable and planned charging during off-peak hours in car parks, thereby freeing up public space for other uses. The two challenges presented are therefore intended to bring about a thorough examination of the charging infrastructure's efficient and sustainable development in these areas, speeding up the installation of easy-to-implement charging points that enable a high turnover of shorty-stay vehicles to be achieved.

With these two open calls, one seeking more economical charging points and the other for creating a flexible, mobile charging model, a total of eight challenges have now been launched as part of the InnovAcció programme, Barcelona’s commitment to speeding up sustainable and social urban innovation to meet the 2030 Agenda goals and find solutions to the needs and demands of the city and its residents in an open and collaborative way.

The aim of the first call is to promote the production of an inexpensive charging point which can be integrated into the SMOU System, the mobile app that offers users all the information on mobility services in the city. While maintaining competitive technical and quality requirements, it aims to facilitate the design of a cheap charger model that is easy to install and has low maintenance costs. It is intended, more specifically, to lower costs by roughly 85%, from today’s €1,500 to a price of under €200.

Cheaper charging points will help speed up the development of electromobility in the city in a smart, sustainable and efficient way. In addition, the wider availability of these charging points will encourage the transition towards electric vehicles not just among city residents but also among other groups, such as corporate fleets of vehicles.

The winner of the challenge will have to provide ten low-cost charging points, five of which will be installed and will operate as a pilot test as part of the B:SM Endolla Barcelona network. The winning initiative will receive 70,000 euros.

A charging point that can be moved to other parking places

The aim of the second challenge is to develop a flexible, mobile charging point. The goal is to provide cover for various parking spaces without the need for the charger to be in a single, fixed location. This mobile charger will have to enable a more efficient short-stay parking service while avoiding an overload of the electrical infrastructure. As with inexpensive points, the flexible-point charging system will have to be connected to the points’ central management system and must be able to interact with users through the SMOU mobile app.

Thanks to flexible points, the network of points can be deployed without the need for them to be connected to a fixed parking place, thereby allowing the service to cover several places and cars located at least 6 car places away (roughly 15 metres). A solution of this type would enable more efficient adaptation to the demand for electric-vehicle charging in short-stay parking spaces, by offering a more flexible service.

In this case, the challenge is worth 90,000 euros and the winning enterprise will have to provide a charging point operating as a pilot test in a B:SM Network Car Parking integrated into the Endolla Barcelona network.

A public competition with maximum transparency

There is an ideas competition behind each InnovAcció 2030 challenge that seeks to find the best solution for the need raised and which enables projects to be tested in the city’s real environments. The challenges are raised through an innovative public-procurement mechanism run by B:SM and through innovation competitions launched under the Mobile World Capital Barcelona’s Digital Future Society programme, an initiative fuelled by collaboration with enterprises, organisations and entrepreneurs with the vocation and capacity to generate innovation.

The call for project entries was published on 4 April. Enterprises and entrepreneurs have until 27 May to submit their projects and the winning proposals will be announced before the end of the year.

InnovAcció: a total of eight challenges under way

With the launch of these two calls, a total of eight challenges have now been launched under the InnovAcció 2030 umbrella to promote innovation in important areas in order to meet the Sustainable Development Goals (SDGs).

To date, and for the five calls that are now closed, a total of 62 proposals have been received, 24 of which are international proposals from 19 different countries. The winning solutions will ultimately be applied in a real context where they will be implemented under a pilot test.

The first challenge, with which the programme was launched, was to reduce the environmental footprint of the technology sector to respond to the climate emergency. It is already at its winners’ pilot-test implementation stage: UOC and Awasense.

A further three challenges were launched in October 2021 from B:SM and Mobile World Capital, through the Digital Future Society initiative. Based on the use of data and technology, the first two set the challenge of designing inclusive and accessible visits to two of the city’s iconic spaces managed by B:SM: Park Güell and Barcelona Zoo. The third challenge, by contrast, was for the implementation of a parking-permit system on the street intended for people with functional diversity, for a fairer distribution of parking spaces.

Barcelona City Council, acting in collaboration with Digital Future Society, has also launched two of the three district level challenges envisaged for this year. The first is a challenge in Les Corts to bring about improved communication accessibility and inclusion in the Guitard toy library. The second is an innovation challenge under way in Eixample aimed at encouraging more sustainable tourism in the district. In this case the goal is to identify innovative projects with a technological basis aimed at promoting Eixample’s heritage, managing mobility, redistributing visitor flows and strengthening smart communication with visitors from the district, among other things. A challenge in Horta-Guinardó is yet to be launched. 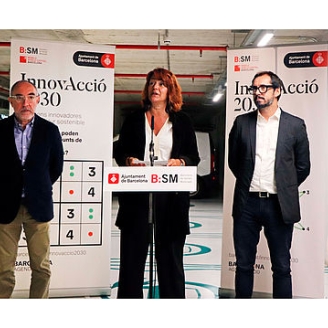