The construction of the new access route, which will provide a direct link between the Olympic Port and Avinguda del Litoral and the Vila Olímpica neighbourhood, will begin in July

After the summer, work will begin on creating the first blue economy centre, located on the site of the former nightspots Moll de Mestral and Dic de Recer

Moll de Mestral will become a huge square, and Dic de Recer will become a new viewpoint looking out to sea, available for sports use and open to pedestrians

An Olympic Port connected to the city and committed to generating economic activity linked to the sea and the blue economy. The process of transforming the Olympic Port, led by Barcelona de Serveis Municipals (B:SM) under the charge of Barcelona City Council, takes another step forward. Work on the new access routes to the port, which will create a direct link between Avinguda Litoral and a large recreational area and promenade at Moll de Mestral, will begin in July.

More specifically, the work consists in building a new thoroughfare for pedestrians and vehicles, which will eliminate any barriers and level out the entire area to create continuity with the Vila Olímpica neighbourhood and the port itself. The redevelopment, evidenced this week with the execution of the first preliminary works, will take a year to complete and has a budget allocation of 3.6 million euros.

The works aim to bring to fruition one of the aims of the Olympic Port in this new phase: to become a space open to the dynamism of the city and closely linked with the daily life of the territory it forms part of. Furthermore, the thoroughfare will give vehicles direct access to the B:SM Litoral Port car park, which will also be reformed.

Once the work is completed, this will be the main entrance to the Olympic Port. To this effect, the vehicle ramp currently located at the end of Carrer de Marina will later be dismantled. The disappearance of this structure, planned for autumn 2023, will eliminate the visual impact it currently has on the whole port.

The construction of the new access routes is not the only advance that will be made in the process of transforming the port in the coming months. In the last week of September, when the summer boating season comes to an end, the redevelopment of the premises of Moll de Mestral and Dic de Recer will also begin. These two premises will become the site of the city’s first blue economy centre, an initiative committed to economic and social development and respect for marine ecosystems. In the case of the Olympic Port, specialisation in nautical activities and services, the circular economy and innovation and technology is planned.

The focal point of this part of the project is Moll de Mestral. The former nightspots will become a pole of attraction for blue economy companies and entrepreneurship, with a useful surface area of 2,600 m2 and the potential to generate 250 new jobs. The space will be divided into 23 premises, making up two blocks of offices located on either side of the new access road. There will also be some communal spaces, including a 150-person capacity function room which can be used by any port installation users to hold events and activities, and will also be available to city residents and the business community.

The reforms of the Moll de Mestral premises will be completed in September 2023 and will have a budget allocation of 5.1 million euros.

The new Olympic Port spaces dedicated to the blue economy will also include 2,638 m2 located under Dic de Recer. A further 28 premises suitable for business activity will be located there, in addition to 70 storage spaces, which will also undergo reforms. In this case, the work will take 15 months and will be carried out in parallel to the redevelopment of Dic de Recer. The two operations have been allocated a budget of 9 million euros.

The transformation of the Olympic Port will mean the blue economy will be concentrated in three large areas: Moll de Mestral, Dic de Recer and Moll de Marina. The latter, which is already in operation, has a total of 17 nautical activity and service premises.

The promotion of the blue economy at the Olympic Port will be developed in parallel to the dynamisation of nautical activity, a strategy which includes, as strategic elements, the use of port installations, which has already been largely achieved, the future reform of the Vela Municipal Centre, and the generation of synergies between the different operators using the facilities, all with a clear objective: to position the Olympic Port as a space for regattas and other marine outreach activities.

The transformation of the Olympic Port also aims to generate more public space for taking a stroll, relaxing and practising sports. In parallel to the reform of these nautical premises, the Dic de Recer will also undergo redevelopment on both the port side and the city side, an area totalling 10,000 m2.

The upper part of Dic de Recer will become a new viewpoint looking out to sea, open to all city residents. To further the objective of facilitating the relationship between the city and the port, Dic de Recer will have two new sets of steps, which will link the area of the promenade with the docks on the lower level.

The completion of the redevelopment of the Mestral business area will also facilitate the creation of a huge 10,000 m2 square.

A new direction with a 2024 horizon

Making headway with the transformation of the Olympic Port ties in with the opportunities presented to the city by hosting the America’s Cup in 2024. The start of the construction of the new access route and the reform of the new spaces dedicated to the blue economy represent the consolidation of two of the strategic lines of the new Olympic Port.

Furthermore, a large part of the updating of the marine and port infrastructures, which has an investment of 9.1 million euros, has already been completed. Notable among the works carried out are the consolidation of Dic de Recer, which was completed this spring, the main tasks of which were the construction of a new wavebreaker and the reinforcement of four submerged dykes to protect the installations from wave surges during storms. This task has allowed the seabed itself to regenerate. The work on the anchoring chain has also been completed and the mooring guide systems have been renovated. These actions have enabled the moorings to be reorganised, increasing both security and the space allocated to each vessel.

A port linked to the neighbourhood

At the same time as the major transformation works begin, in July, the Olympic Port will launch a series of initiatives aimed at the surrounding neighbourhood The objective is to get them involved in this new stage, which means a strengthened relationship with the neighbourhood and the port’s integration into the daily life of the city.

Among other actions, an information leaflet will be sent out and guided tours of the Olympic Port installations will be organised, with the collaboration of the local resident associations of  Vila Olímpica, Front Marítim and Diagonal Mar The purpose of the tour is to explain how the works are progressing, the new uses of the Olympic Port and the activity that will be developed there by B:SM, who is responsible for its management.

Furthermore, in September, and to coincide with the reform of the blue economy premises, the Olympic Port will organise an outreach activity day for families. 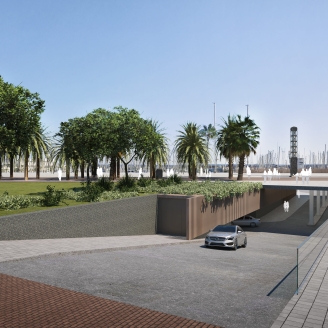 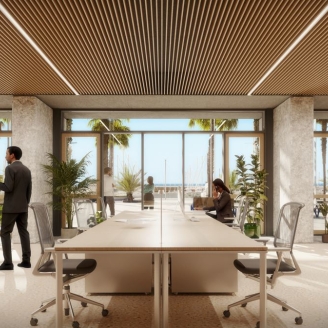 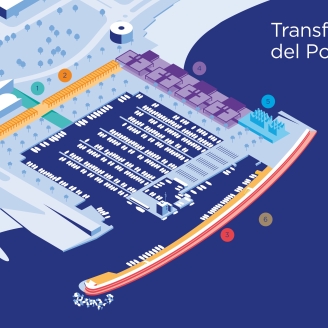