The Olympic Port, starting point for the Ophiusa Regatta

The Olympic Port continues to help with the revitalisation of nautical activity, which is one of the core strategies of its transformation

For the first time, the Olympic Port is hosting the start of the Ophiusa Regatta. Tomorrow, 14 April, Barcelona will become the starting point for the 19th edition of the event, which links the Catalan coast with the island of Formentera. The regatta, which ends on 16 April, includes 92 participants on 22 vessels; 12 will be starting from the Olympic Port and 6 from Majorca. The vessels are due to arrive in Formentera on Saturday, at 2 pm. In the last edition of the regatta, which until now had always started from the Port of Sitges, 19 sailing boats took part.

Recent improvements made to the Port’s facilities have made it possible to increase sailing safety and improve access from the sea. The dredging of the port's mouth has increased its depth to 4 metres, which means that the vessels can congregate inside the port at the starting time.

Barcelona de Serveis Municipals (B:SM) has been managing the Olympic Port on behalf of Barcelona City Council since March 2020, in order to oversee its transformation. During this new era, under the criteria of sustainability and public management, the Olympic Port aims to be a public space which brings together nautical activities and the generation of economic activity, mainly linked to the sea and the blue economy.

At the end of February, work was completed on the anchoring chain and mooring guide systems. These adaptations have made it possible to reorganise the mooring points, adapting their width in order to fit the needs of vessel beams. As a result, each boat moored at the port has more space.
Hosting the 19th Ophiusa Regatta fits in with the aim of reinforcing the Olympic Port’s links with sport and nautical activity. 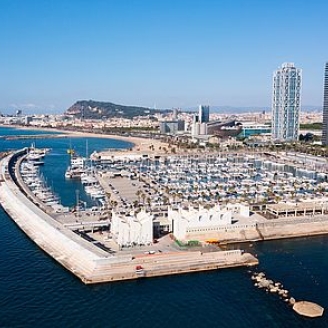